An queer sitcom about facing strange and insubstantial problems.

Running a business is hard. Running a business alone in an old, haunted building is even harder. Janine didn’t know what she was getting herself into when she opened Prism - but with the help of Ryan (an astronomy professor with a useful knack) and Kale (an artist with a mind for marketing), she manages to stay aloft.

JANINE is up to her eyeballs in food prep. KALE and RYAN chat at the bar.

KALE: So...you see them all the time?

RYAN: It’s hard to describe. It’s more like remembering something you had forgotten. You know that feeling? When it just comes to you, clear as day?

RYAN: I sense things. I know them, they’re a fact, it’s just how they are. Like how I can look at your jacket and I know for a fact that you have bright blue paint splattered on the left sleeve. I don’t have to second-guess or analyze that, I don’t have to get a second opinion. I know what I’m seeing, because I trust my senses to tell me.

JANINE: What do your senses tell you about this tapenade?

JANINE: You didn’t even try it.

RYAN: I don’t need to try it. It’s tapenade. Tapenade is not good.

RYAN: Do you know what tapenade is?

JANINE: Would you just let them try it?

JANINE: Excuse me, it is much more than that.

JANINE grumbles something about needing friends with more adventurous palates and disappears into the back again.

KALE: So it is a visual thing, though? You can see them?

RYAN: Not so much. I sometimes see something, but not all that often. Usually only if there’s a lot of energy or emotion. Even then, though, I don’t see the actual person.

KALE: What do you see?

KALE: That is so cool.

JANINE: (Yelling from the back.) How do we feel about stuffed sardines?

RYAN: (Calling to her.) How do you feel about poison?

Sound of JANINE grumbling in the distance.

KALE: This place has a lot of ghosts, right?

KALE: So if you could see them all, all at the same time, it would probably look like…

RYAN: Sort of like your jacket. Swirls and splotches of all different colors.

RYAN: I’m really enjoying how impressed you are with me. By all means, please keep that going.

KALE: The whole world would look like an abstract painting, then. If you could see them all the time, I mean.

RYAN: I never really thought of it that way, but you’re right.

KALE: I wish I could do that.

RYAN: It has its downsides.

KALE: Well, sure. All skills do.

RYAN: You think it’s a skill?

RYAN: No, not really. A skill is like...your art. Or Janine’s repeated attempts at making palatable food.

JANINE: (From back.) I heard that.

RYAN: What I can do, it’s more of...an ability. Just a thing I happen to be able to do. Like how some people can sing.

RYAN: Janine, I beg you, put down the ancient cookbook and pick up the internet.

RYAN: Are any of the words about to come out of your mouth related to organ meat?

RYAN AND KALE: No!

Her swearing is drowned out by a crashing sound.

JANINE: Recording this radio ad, shh… This weekend, come on down to Prism, the new LGBTQ+ space-

JANINE: Yes, why? What should I say?

KALE: Talk about the old-world charm.

RYAN: And the menu to match…

JANINE: But they need to know it’s for -

KALE: Listen, you have a bar with a jukebox that plays itself. Just say that.

RYAN: It doesn’t always, though.

KALE: Prism. Come for the queers, say for the weird.

RYAN: The snacks aren’t bad either.

Creating a Gender Inclusive Podcast on a Shoestring Budget.

A Presentation by Evan Tess Murray and Tal Minear

Many creators see the universe of audio fiction and want to contribute, but funding is a barrier. Many creators also want to be inclusive of LGBTQIA+ people but have questions about how best to do that. The need for more stories from marginalized perspectives runs up against financial barriers. As a pair of collaborative creators, Tal and Evan have expertise in both of these areas, both on separate projects and together. They'll present their ideas about how to create queer-inclusive audio fiction on a tight budget. Do you want to tell more inclusive stories? Do you want to find a way to make your voice heard without outside funding? This introductory presentation will get you started.

About the Show:
Light Hearts is a queer sitcom about facing strange and insubstantial problems.

Janine didn’t know what she was getting herself into when she opened Prism - but with the help of Ryan (an astronomy professor with a useful knack) and Kale (an artist with a mind for marketing), she manages to stay aloft. Light Hearts follows the daily shenanigans of serving Prism’s customers, solving strange problems, and wrangling the occasional unexpected patron.

Release Schedule:
The first episode debuts April 6, 2020.
Subsequent episodes will be released on an as-finished schedule, with no set time between episodes. 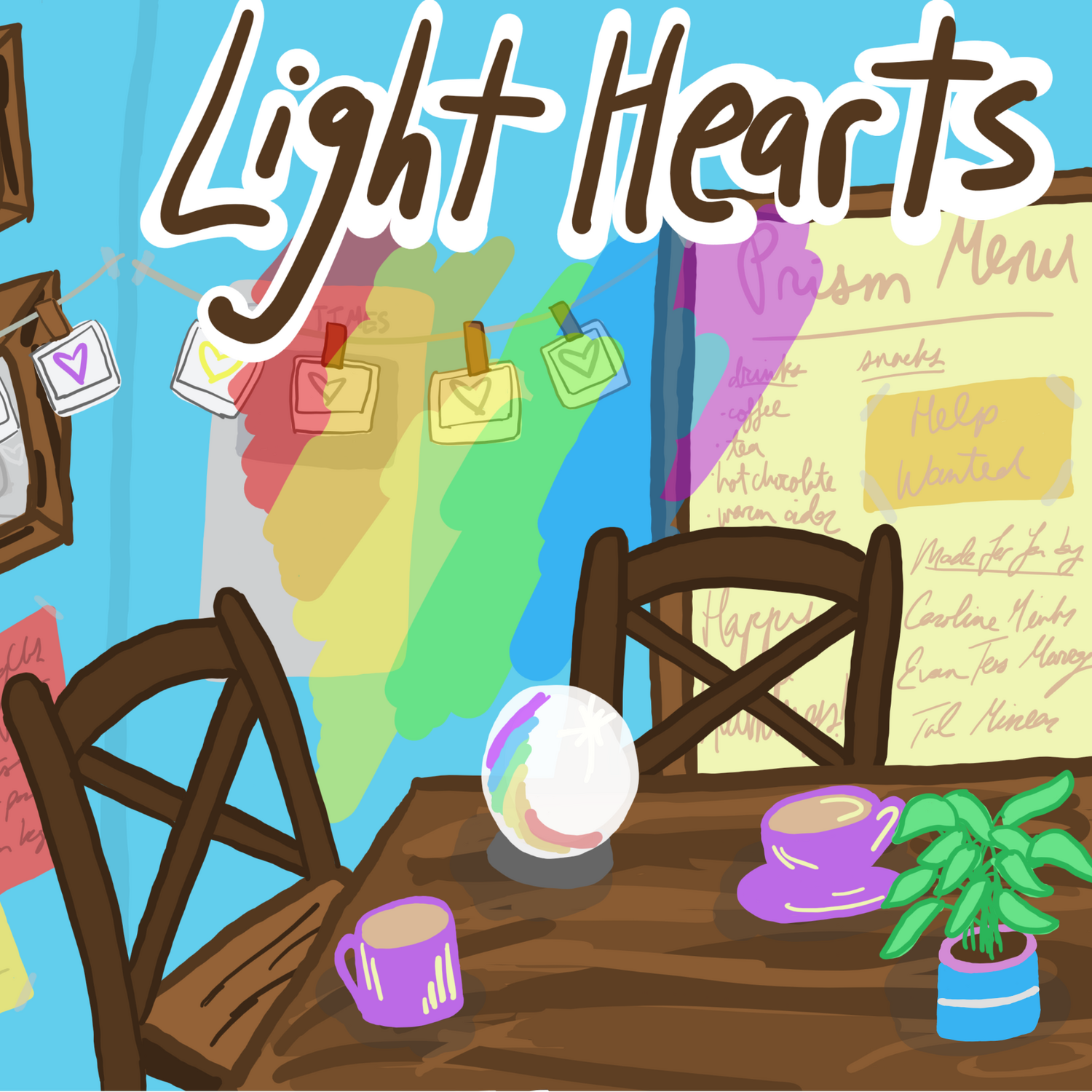